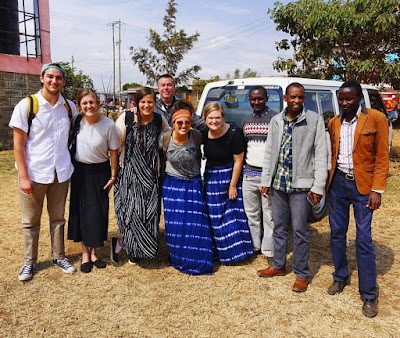 Here's a recap of Friday night through Sunday night.

Friday night Katie, Lily, and I managed to meet up with Caleb, Kelsea, and Anna at the Nairobi airport. As you know they were flying in from Mombasa and we were arriving from the U.S. Our flight was delayed about 45 minutes, so thankfully our international texting worked and Daniel, our Masai host, was able to find the Mombasa team while they waited for us to arrive. I had to try to explain Pop Rocks and Marshmallows to the customs agent who went through one of our bags!
We had an uneventful (no near miss with any Zebras) nearly 1 1/2 hour ride to the Eco Lodge in Masailand. They had a nice meal waiting for us even though it was nearly 1am!
Saturday morning we had breakfast with Daniel at Eco. Then we had some good team time with a devotional, prayer, and planning for the week. We also heard how Caleb killed a Baboon with his bare hands in Mombasa, the largest Baboon they had ever seen! No, it didn't really happen. We think it's probably just the malaria medication taking its toll! Lol
We then took a long walk around the Eco Lodge grounds and a little of the surrounding area. It was a beautiful day to experience the African landscape. We had planned on more team time, but when we all sat down we realized that it was 1:45 and lunch had been planned for 1! Something to do with jet lag we believe!
After lunch we took some personal time for study, devotions, and napping. Daniel came by with his wife Jemimah and the group had a nice visit with them. My SIM card for Kenya wasn't working and it was for our only means of communication here. We called Safaricom and they said I needed to take it to the airport Safaricom store! Eric Belz was arriving Saturday night to teach Pathways with me, and Daniel and Jemimah were going to pick him up, so off we went to the airport. The phone was fixed, we picked up Eric, arriving  back at Eco around 1am. The team had dinner and more time together praying and worshipping while we were gone.
Sunday brought an 8:30am team meeting and prayer time where everyone met Eric and Caleb led devotions. We had a nice breakfast with Daniel. He brought the team to minister at a girl's school church while Eric and I ministered at the church in Bissil. The team led worship and gave testimonies and reported that it was an amazing experience! After a late lunch and returning to Eco, while Eric and I prepared for the weeks Pathways training, the rest of the team took a trip shopping for supplies, water, and food. Jemimah went with them as an interpreter and guide. Believe it or not, warmer clothes were on the list of shopping items! It's been around 50 at night and hovering near 70 during the day. Some of the female desert dwellers weren't prepared for these temperatures.
We had a really good, inspirational team time over a late dinner, then bed and good sleep for the start of our week.
Today the team is visiting villages, sharing the gospel, and inviting people to a new church plant in the area. Eric and I start our first day of training with the pastors in the Pathways course.
God has been very close and evident in all that we've done so far! I couldn't think of a better group of people to team up with in this new adventure. Please pray for jet lag, continued health, continued growth together as a team, and that we would be led strongly into divine appointments this week. Pray for protection from the powers of this world as we storm the gates of Hell!

In His Grace,
Pastor Dan